The expediency of increasing the share of mineral additives in cements does not raise doubts for cement plants, and at the same time, it is not always unambiguous for cement consumers.

Thanks to separate technologies for grinding individual components and subsequent homogenous mixing, it became possible to purposefully regulate the grain-size distribution of cement, to obtain cements with optimal dispersion. However, given the current shortage of high-quality cement, there is no need to talk about the use of cement of the corresponding grade today. It is good if you manage to work with the same reliable supplier and cement that meets European standards.

And it is very difficult to obtain a certificate for the supplied cement with actual characteristics in terms of activity, bulk density, dispersity and other parameters, and not the spread allowed by GOST. Therefore, only large enterprises with well-equipped laboratories can afford to use mineral additives, for example, blast-furnace slags with optimal dispersion, which have a functional dependence on the dispersity of cement.

The efficiency of cement can be increased (and, consequently, its consumption can be reduced) by increasing the fineness of its grinding. It is well known that the main properties of cement, including its activity and hardening rate, are determined not only by the chemical and mineralogical composition of clinker, the shape and size of alite and belite crystals, the presence of certain additives, but also, to a greater extent, by the fineness of the grinding of the product, its granulometric composition, as well as the shape of the powder particles.

In precast concrete factories, in order for concrete to reach stripping strength as soon as possible, they often go for an overestimation of the concrete grade by increasing the cement consumption.

This can be avoided by using a binder of a finer grinding: with such a binder, concrete hardening at an early age is faster. You can save cement in another way: add sand, limestone, ash or some other filler to the cement and grind the cement with it. However, studies show that the binder grade decreases, although not entirely in direct proportion to the amount of aggregate introduced.

To obtain concrete of grades up to 200 and even higher, such a binder is quite acceptable. Depending on the amount of added aggregate (30-50%), up to 30% of cement can be saved.

For example, some manufacturers of disintegrators assure that the joint grinding of commercial cement with limestone powder and a plasticizing additive increases the strength of the samples at the initial hardening period by at least 46%, and when one fifth of the cement is replaced with a micro-filling additive, the strength gain at the age of 3 days will be more than 90%.

However one should be careful with such statements. It is possible to believe in these figures for long-stored cement, with a fineness of 2000–2500 cm2/g and a very poor granulometry of cement grains, but for cements with a grind of 3500–4000 cm2 /g, it is doubtful, especially for cements with mineral additives. However, to obtain a highly active fast-setting cement, it is necessary to increase the fineness of grinding from the usual 2000–3000 cm2/g to 3500–4500 cm2/g, at the same time, an increase in the specific surface area of ​​the cement powder over 6000 cm2/g is doubtful and there are many questions and not fully understood.

Cement grinding with additives has become an epidemic. The quality of the additives is not controlled – the ashes are unstable and contain unburned coal. In the USA, the standard establishes the maximum level of unburned coal in ash for its disposal into concrete – 3.5%. When using ash, additional organic additives are introduced, which reduce the entrainment of air into concrete by coal particles. Obviously, they do not do this in our country.

High quality cement implies a whole range of properties, not just 28 days compressive strength of the cubes. Indeed, fine grinding increases the rate of hydration and rapid strength development, and reduces the proportion of unreacted clinker in concrete (mainly C2S). But at the same time, the rheology of cement changes dramatically and it may no longer have properties that allow it to be transported to silos and then fed by a feeder to a concrete mixer. Moreover, rapid hydration can create fast setting problems.

In order for conventional factories to be able to introduce these technologies, ready-made small technological lines, or separate units of the AVS type, are needed. Some scientists find it profitable to supply the factories with cements in the form of clinker. Grinding sections provide the most economical consumption of binders, allow using local raw materials as mineral additives, including waste, and allow wet grinding. For the organization of grinding can be used small-sized devices located in the concrete mixing shops between the batching and mixing sections. There are single copies of successful installations, such as an electric mass classifier (EMC), effective magnetic induction disperser reactors with a vortex layer of ferromagnetic particles  (АVS-100, АVS-150) using an alternating electromagnetic field to activate cement and fillers, disintegrators of wet grinding (Fig. 1). 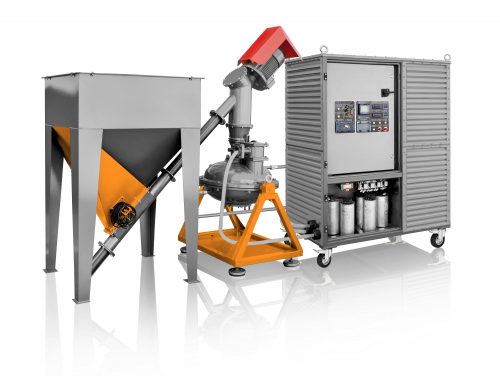 The maximum economic effect from the introduction of mechanical activation into the concrete production technology is achieved only with the correct combination of such processing parameters as the selectivity of final grinding of commercial cement with the ABC vortex layer devices, the optimal energy intensity of the mixing process and the availability of raw components, again with the ABC vortex layer devices. The process of cement activation is not only obtaining the optimal grain size, shape and surface of the cement grain, but also ensuring its complete hydration.

GlobeCore is ready to help introduce cement activation lines into existing production lines, grinding it to any fineness, AVS is able to grind to a dispersion of 3-5 microns per dry, while the productivity of an AVS-100 type apparatus will be about 100 kg / h, which is not much not a little for a cost of 4 kW, we get grinding from 70-80 microns to a size of 3-5 microns in 1 hour