The action, motion and energy of the ferromagnetic particles are the decisive influences on the methanolysis process. In turn, these factors are defined by the shape of the particles, their diameter, the ratio of length to diameter, the amount of particles in the chamber and a few other things.

The amount of particles in the operating chamber of a rotating electromagnetic layer device is directly linked to the efficiency of their influence on the reaction mass.

According to theory, the entire layer rotates as a whole. The motion of the particles in a rotating electromagnetic field is possible only up to a certain amount of particles, at which point all particles stop moving.

Large cylindrical particles rotate relative to the axis of the unit, but also move relative ot each other. In other words, the original idea was that the effect of the ferromagnetic particles boiled down to regular mechanical stirring and grinding.

The forces and momentum cause the particles to move in a complex manner: forward motion with frequent and sharp changes of velocity and direction and rotational motion with alternating angular speed. Each particle moves independently of the others. Experiments show that the motion begins with the induction in the chamber exceeds 0.09 tesla.

There are two distinct tendencies of motion here. First, the entire layer of particles (due to centrifugal forces) moves at a certain distance from the induction coil axis in the direction of EM field rotation (the induction coil is vertical). Second, the motion of most particles combines the motion along a circle with complex large amplitude oscillations (the amplitude approximates half of the particle length) relative to their centerpoints.

If would seem that local electromagnetic fields are generated around each particle, which change the structure of the magnetic field in the induction coil in a pulsatile manner.

With complex mechanical and magnetostrictive oscillations (due to the delay of the motion relative to EM field rotation, as well as magnetoelastic effect during collisions), each particle becomes a source of cavitation. The processed liquid ingredients (a mixture of vegetable oil and the solution of methanol and base) have a very small compression coefficient, which means that large pressure changes are accompanied by small changes of volume. 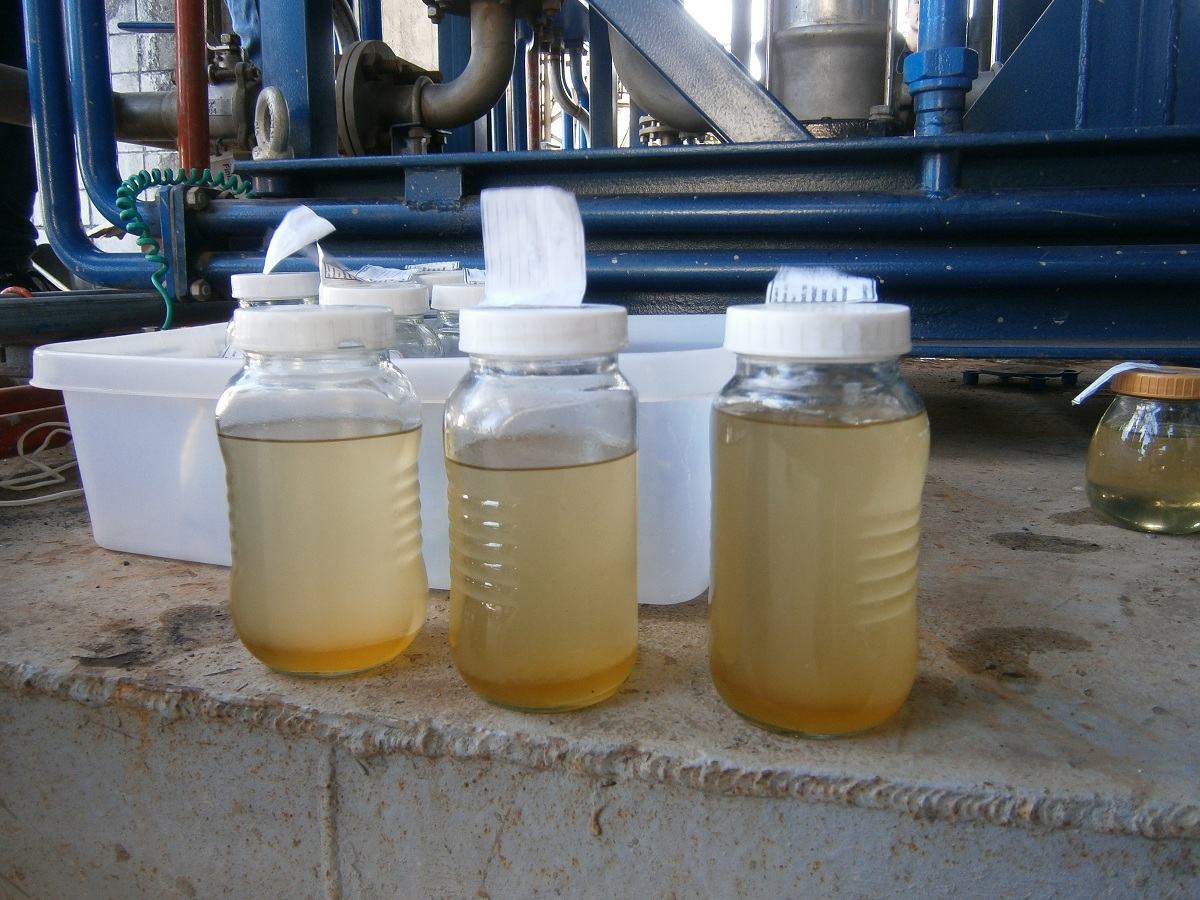 The pressure created at the boundary of a small spherical bubble due to the interfacial tension, is so high that it cannot be balanced by the vapor pressure, while the air under such pressure should rapidly dissolve in the fluid.

The intensive motion of the particles cause the gas bubbles to almost immediately disperse and fill with saturated vapor of the processed liquid, creating the conditions for acoustic cavitation. Particle motion drives the intensive motion of the fluid, creating the conditions for discontinuity of the fluid, i.e. stream cavitation.

We assume that the process efficiency of the devices with a rotating EM field is due to several factors which influence the processed fluid together:

All the forces and factors are synergistic and create previously unknown phenomena in the vortex layer devices, improving the efficiency and intensity of the chemical processes.